A Hilary Duff-aissance was inevitable. “With Love,” a single off her fifth album Dignity, has gone viral on TikTok for the lackluster (or interpretive, depending on who you ask) choreography Duff deployed when performing the song live. Chock-full of robotic arm movements, it’s an accessible dance for the rhythmically challenged (and perhaps a brilliant deconstruction of pop star expectations in the wake of dancing Britney Spears-alikes that flooded the market of the time).

A woman of many firsts, Duff was the Disney pop star prototype and the reason Miley Cyrus, Demi Lovato and Selena Gomez exist. Her second (first non-Christmas) album, Metamorphosis, went No. 1 on the Billboard 200, leading the pop-rock charge among the Radio Disney contingent. Dignity marked yet another often duplicated first: it was the first pop-rock to dance-pop transition by a Disney starlet, which would become a common way to signify said star’s impending adulthood (see: Cyrus’ “Can’t Be Tamed,” Lovato’s “Neon Lights” and subsequent album Confident).

##duet with @yungdaddycack HERE YOU GOOOOOOOO!

The “good girl gone bad” is a common trope in pop stardom, but Duff put particular sonic borders on the Before and After. Her pop-rock era signified tweenaged innocence and accessibility (“So Yesterday” or “Why Not”), a side effect of our cultural associations of acoustic guitar sounds with rawness or authenticity. Dignity was a dance-pop transition into the mature world of moral complexity, partying and sex, and Duff’s music and public image often began to reflect these themes.

Dignity was arguably the first time we saw a born and bred multimedia Disney star (Spears and Christina Aguilera excluded, given they were not banner stars for the network nor did they pursue their music careers under the Disney umbrella) make the public transition into adulthood. Her evolution from child star to entertainment industry young adult was smooth, as Duff largely evaded the scandals and vices her successors would bear.

Released just months before Spears’ Blackout in 2007, Dignity similarly defines electro-pop’s revival and the pop stars that would emulate Duff’s path. The fizzy, edgy brand of production deployed on Dignity would become the standard in following years, and you can hear it in everything from mainstream efforts like Lady Gaga’s The Fame to more cult projects like Heidi Montag’s Superficial.

Largely co-written by Duff and frequent collaborator Kara DioGuardi (Google her credits to see a list of generation-shaping hits), Dignity reflects a 20-year-old confused about the difficulties of love, cautious about the risks of vulnerability and a desire to “not be like other girls.” Duff’s brand of apple pie Americana had always been the most geared towards “relatability” among her peers. To those who couldn’t relate, she may have come off as more banal than her contemporaries in her tween days, as an idol parents could co-sign. This is the girl who memorably screamed “I want a bra!” on Lizzie McGuire, reflecting the eagerness of many a tween to grow into adult bodies and modes of expression. Dignity questions what happens when you get there.

Related | In Bed With Perez Hilton, Per His Request

In Duff’s case, this included her fear and frustration towards a real-life stalker who was eventually sentenced to four months in jail for the crime. She channeled these feelings into Dignity’s “Between You and Me,” which sees Duff make the attempt to navigate an inflated case of toxic masculinity, managing the creep’s insistence by assuring him that it’s not him, it’s her. Then there’s “Dreamer,” bumping up the tempo as Duff’s lyrical content gets darker and she describes specific examples of her stalker’s one-sided obsession. 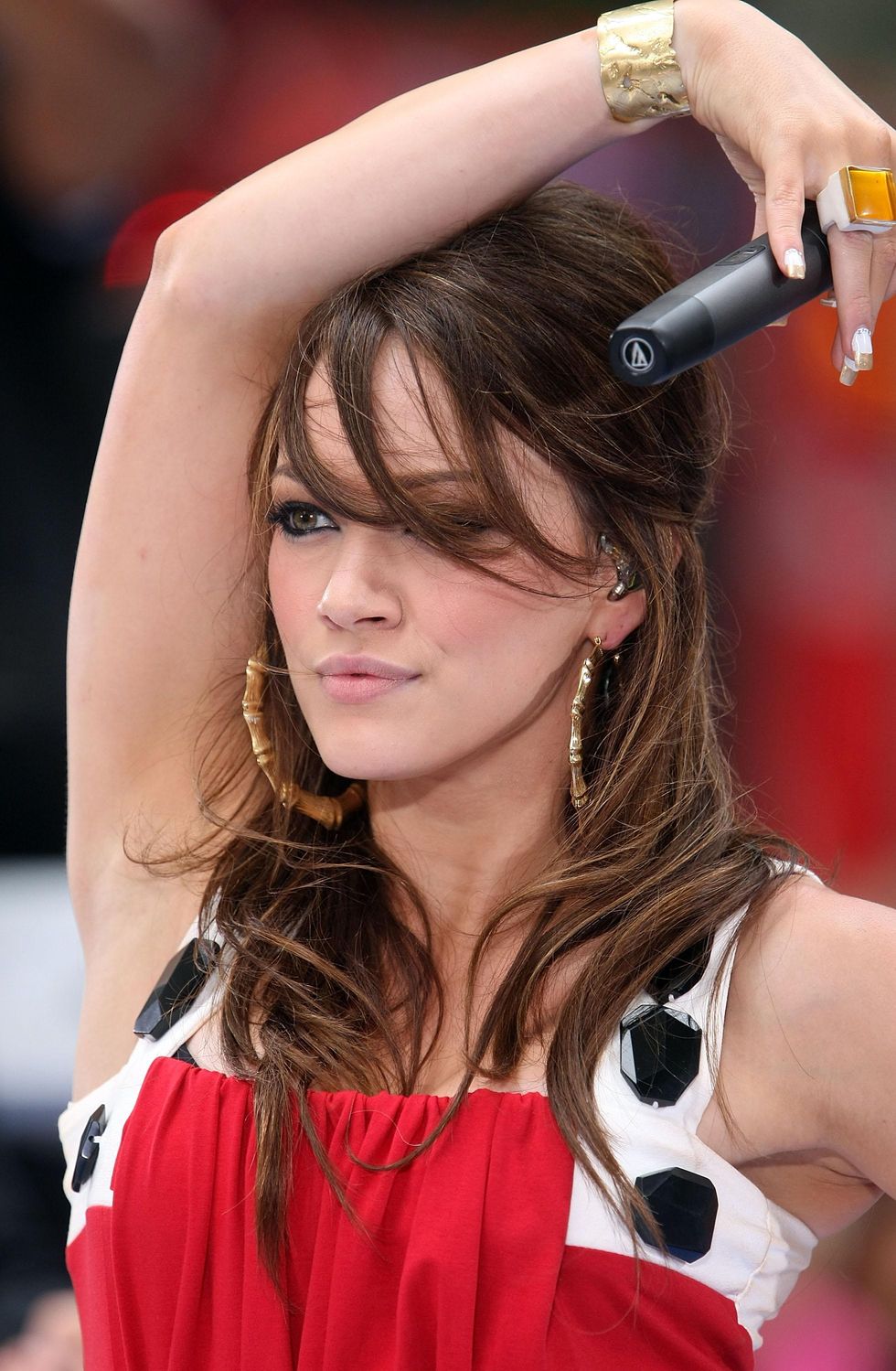 The title track is a biting critique of the celebutante-ification of mid-aughts Hollywood, taking to task some of her tabloid-happy counterparts: “You’d show up to the opening of an envelope,” she sings. “It’s not news when you get a new bag.” The “dignity” in question implies levels of class that are not compatible with the proto-influencer industry. Our concept of “famous for being famous” was likely baffling to a product of Disney’s rigorous studio system multimedia development. Aside from being a general shot at party girls of the era, the song is rumored to be about Nicole Richie, who had hooked up with Duff’s recent ex, Joel Madden (who Richie would end up marrying).

Unlike many of her contemporaries, Duff didn’t fall into the misogyny-fueled trap of solely railing on the “other woman.” She was an equal opportunity subtweeter, honing in on Madden with “Danger,” which comes out swinging: “Were you born in ’74? Oh no.” Duff and Madden’s relationship began when she was 16 and he was 24, and as Abby Schreiber reported in a 2015 reflection on the relationship, “several Google searches focusing on articles published during the time in question — roughly 2002-2006 (just to give the results a wide berth) — turned up very few hits that made any reference to things like ‘underage’ or ‘illegal.'” The cultural ambivalence for underage celebrity relationships at the time and (the still relevant) lack of protection for young women in Hollywood makes lyrics like, “It may be wrong to get to know you more/ But I’m not sure,” that much more crushing.

Dignity should be remembered as a pop hallmark, expressing emotional depth while subverting the perception that dance music is vapid, but Duff’s legacy has overall suffered from its lack of controversy. Meanwhile, her contemporaries faced very public struggles to admit that our culture rewards disaster, and this phenomenon peaked in the mid-2000s with tabloid culture serving us celebrity breakdowns on a platter. Of course, these “rewards” are distributed only to the press and bad actors who profit off the star’s descent.

And it isn’t like Duff didn’t have ample opportunities for Hollywood scandaling, from her feud with Lindsay Lohan over Aaron Carter (yes, seriously) to her feud with Paris Hilton to her feud with Faye Dunaway. But notable in all of these conflicts is Duff’s prevailing “dignity.” She was the one cheated on, the one pushed, the one snarked at, never causing a ruckus unless provoked, taking her job as teen idol very seriously. “Burned,” with orchestral-level grandiosity and anxious violins that sound like her own take on a Bond theme, reflects on the isolation that this perfectionism and protectionism brought: unlike the other girls, Duff “made [herself] left out.”

Emblematic of her legacy is how “With Love,” Duff’s highest-ever charting single, is a club song solely focused on begging a partner for their honesty in an emotionally developed way. A plea not based on cheating or any pre-established dishonesty, it’s born from her desire to be treated like an adult, to hear the hard truths and to be held accountable for her shortcomings. She wasn’t like other girls, so who needed dexterous, energetic, fluid choreography? While some Gen Z TikTokers celebrate Duff for her out of context, lackluster dance moves, commenting “go on girl, give us nothing,” the singer’s Dignity era gave us so much more than a kick-ball-change. And if I carried pop on my back, I’d be a bit low energy too.