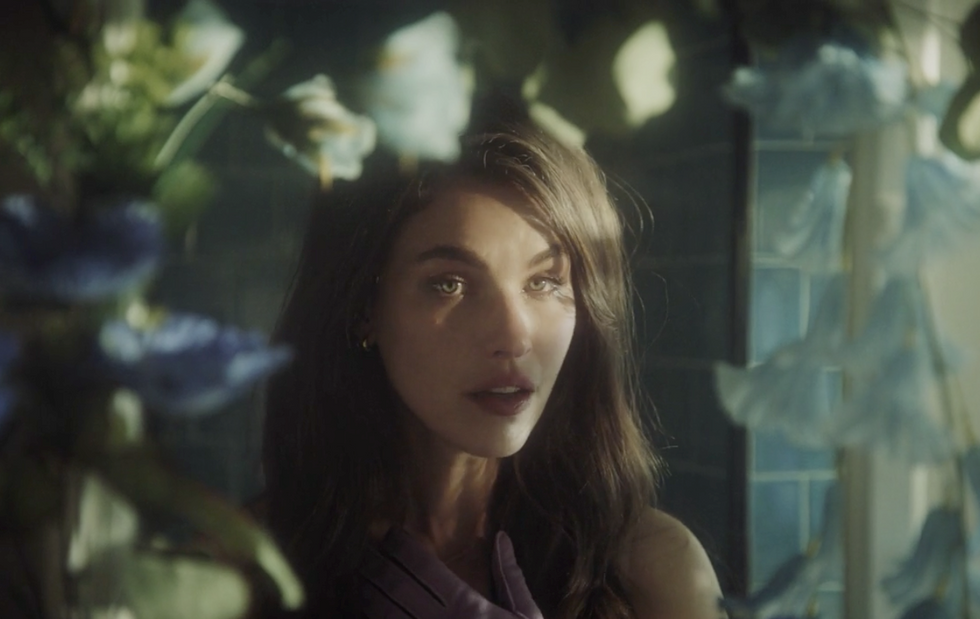 Rainsford has been on a roll this year, first with her April single, “2 Cents,” followed by the most recent release of “Crying In The Mirror.” Today, the self-proclaimed “minimalist weirdo-pop” musician is showing her vulnerability and a lifelong method of catharsis in her brand new video featuring some famous close friends. 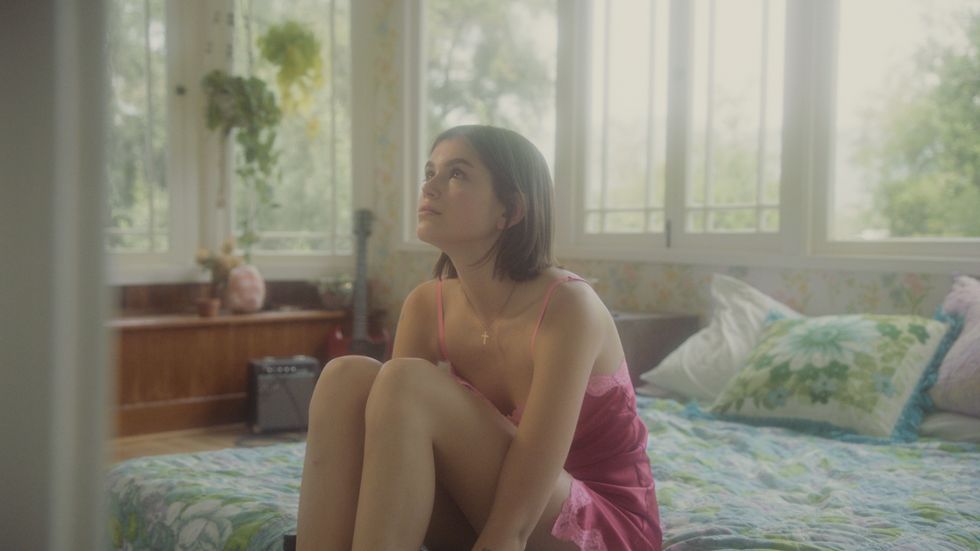 The companion video, directed by Cara Delevingne and starring Kaia Gerber with Gregg Sulkin, clues listeners into a relationship that both parties are just better without. Rainsford wrote the song after a bad breakup, and had a very specific ’90s soap-opera theme in mind when creating its visual.

Below, PAPER caught up with Rainsford to talk about her new song, her collaboration with Delevingne and creating a video during a pandemic.

How have you been doing during the pandemic and the quarantine?

I’ve been doing pretty well, all things considered. I have my sister and a really great group of quarantine friends, which is such a blessing. I’ve been writing music and doing my best to stay productive because so much of my self-worth comes from feeling like I am making progress in my career. However, I am also trying to allow myself to accept this new speed and do my best to enjoy it. We’ve been having game nights as a group, and I have been painting and gardening some. Also, I have been doing a lot of YouTube workouts and walking around my neighborhood with my sister.

Has creating new music been easier or more difficult?

At first it was definitely more difficult for me because I was really impacted by the hectic energy of the world. Everyone was so scared of one another; producers didn’t want to work. Thankfully, now it seems like things are slowly beginning to return to more of what we’re used to.

“As a director, Cara [Delevingne] is confident, encouraging and thoughtful.”

What inspired “Crying In The Mirror”?

I wrote “Crying In The Mirror” after a really bad breakup when I was essentially begging my ex to get back together, which we did briefly but it didn’t last, and now I’m thankful for that. I’ve done this weird thing ever since I was a little kid, where I actually do watch myself cry in the mirror when I’m really upset. After writing the song and sharing it with some friends, I found out that a lot of other people do that too. I think it’s some kind of coping mechanism in a way, being able to confront your emotions so directly. I also think there’s an element of self-indulgence in the emotion.

You’ve said in previous interviews that you always work with a producer and try to collaborate with other people as much as possible. What was the process of creating “Crying In The Mirror,” when collaboration is especially difficult under quarantine.

I wrote this song with one of my good friends and really talented producer, Cameron Hale. We basically start every session talking about what we’re both going through. Cameron will start working on the track, I’ll sit down on my laptop and start writing lyrics and melody, and after about 30 minutes or so — I’ll have something going and sing Cam what I have. He’s always really positive and receptive, and will say something like, “Damn Rainsford, we did it again!” 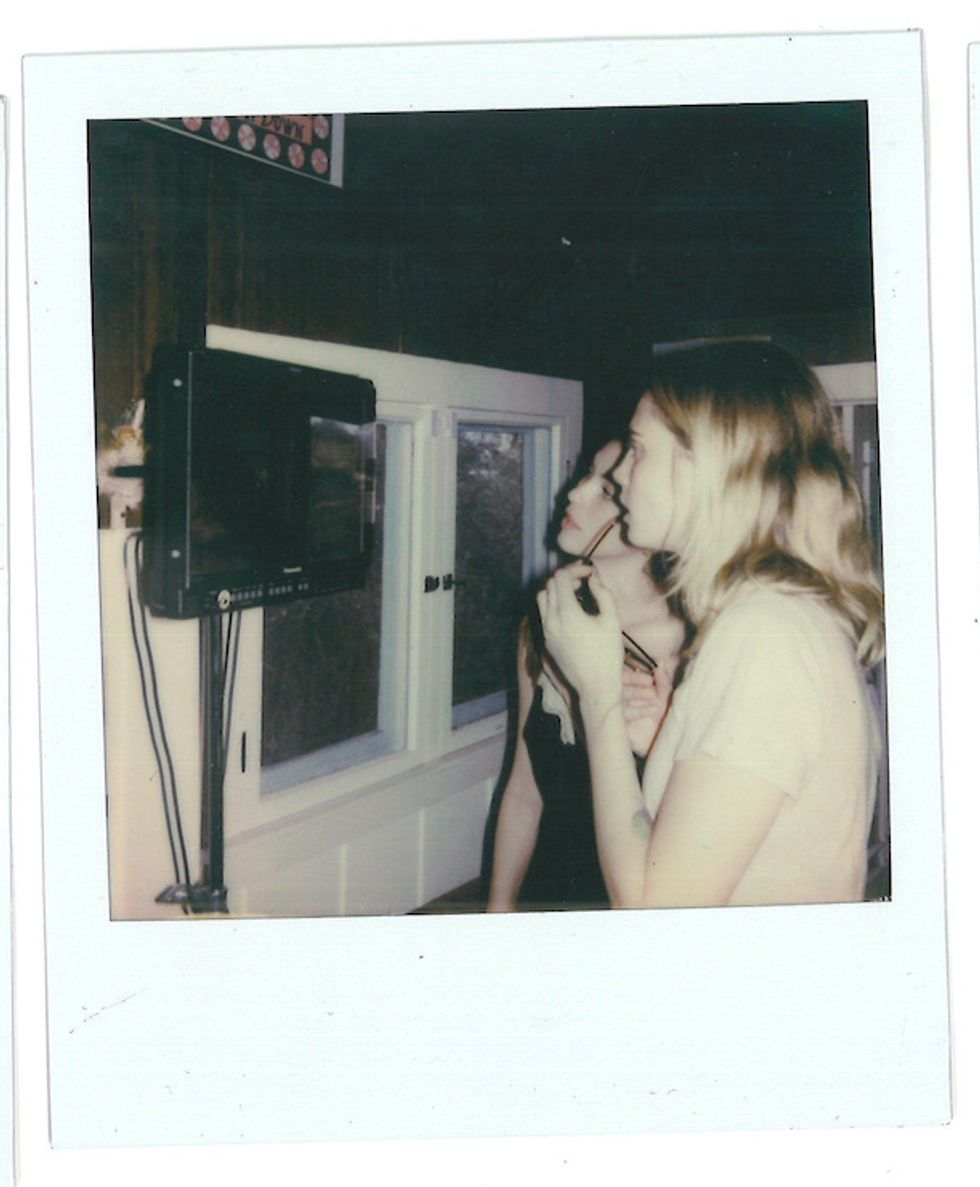 Your new music video is directed by Cara Delevingne. How did you come to collaborate with her?

Over the past several months, Cara and I have become really close. I had the idea for the music video and when I told her about it, she was just as excited as I was and wanted to be involved. I really trust her as an artist and trust her vision. On the shoot day, she was an amazing leader. As a director, Cara is confident, encouraging and thoughtful. I’m so excited to share the final result.

Did she mostly execute your vision, or did she bring her own ideas to the table, as well?

I knew I wanted to make a music video that was like a ’90s soap opera version of my life. I wrote the breakdown/shot-list and created a mood board for it. I made sure Cara was on board with all my ideas. During the shoot, we also followed the ideas that arose moment to moment. Two days after the shoot wrapped, we edited the music video together.

What was the process like creating a music video during the quarantine?

I am so lucky to have such talented friends. I think more than ever it feels amazing to be creating something positive and utilizing the extra time on everyone’s hands.

We’re also obsessed with your more recent track, “2 Cents.” What’s the story behind it?

I wrote “Two Cents” early on in a relationship, when I could feel that there were cracks forming already. I was so desperate for it to work. I was doing everything I could to prove myself and earn my partners love, which is obviously a really unhealthy dynamic. I worked with the same producer on that track, as well.

Last time you spoke with PAPER, it was 2018. You described your sound as “minimal R&B weirdo-pop.” Do you think your sound has changed?

I don’t know if it’s changed altogether, but I think I have grown as an artist. I am constantly exploring and trying to push myself. The art we make is a reflection of where we are and who we are in that moment. Hopefully my music matures and improves as I do, as well.

Stream Rainsford’s “Crying In The Mirror,” below.