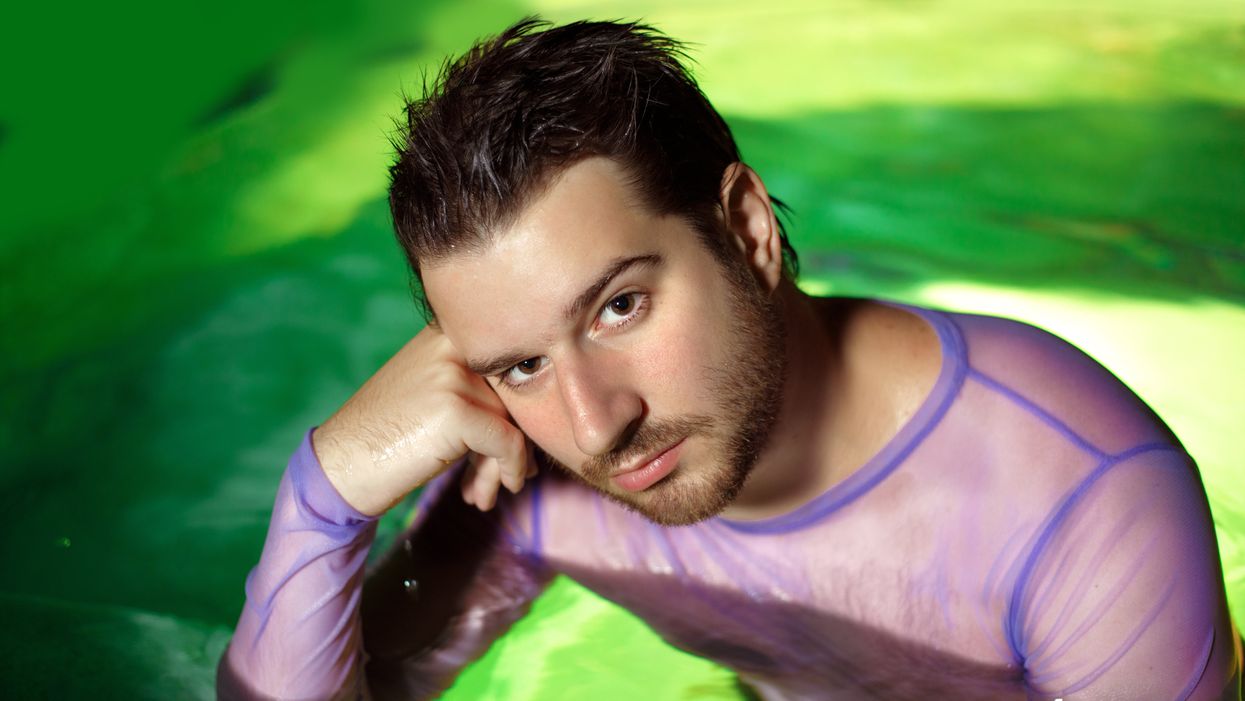 The story behind Alex Chapman’s new solo single — and first since 2014’s “Switch Hitta” — is a relatable one. “It was the beginning of quarantine and I was overwhelmed,” the LA-based songwriter and DJ says. “It felt like everything was sinking deeper into darkness.” Naturally, his instinct “was to party as a means to cope,” but “obviously couldn’t” and instead wrote a song about how he was feeling.

“Blur” is the result, out today, as Chapman unloads all his frustrations, from “fake friends” to “fake money.” With self-loathing lyrics (“I’m the fucking worst”) and the ultimate resolution that “nothing matters,” he yearns to numb reality and “be a blur.” If you’ve ever been wasted at home in quarantine — yes, of course, you have — the D v D-produced track captures that bittersweet high by building into techno chaos with hardcore beats that feel at once dark and euphoric.

Chapman first discovered D v D when he was scouring Soundcloud for new music and stumbled upon the producer’s remix of Beyoncé’s “Naughty Girl.” After using it in a mix, the two got in touch and started “to mess with some ideas for an artist project.” Chapman says he “loved his sound and luckily he was down to work.”

For D v D, the process of collaborating with Chapman presented a new challenge. “Working from across the continent was different than I’m used to, but it felt streamlined and fun,” he says. “Alex sent me a skeletal sketch of the beginning of the song and I started to build on it. After bouncing sounds and arrangements back and forth a few times, Alex suggested I go full happy hardcore and make a big drop after the hooks. I went for it and that’s when we knew we were making a really exciting, special record.”

Below for PAPER, Alex Chapman and D v D list off some hidden gems they’ve discovered while locked in quarantine for months. From The Saddest Angel to Barker, these are the many sounds that quietly influenced “Blur.”

I’ve been listening to a lot of ’90s/early 2000s eurodance because it reminds me of getting hyped up before [DJing] shows during the [Kim Petras] Clarity Tour. Scooter is kind of like the DJ Khaled of Eurodance — he yells iconic random things over songs and raps sometimes. This is one of my favorites by him.

I wouldn’t say this is “hidden” because a lot of people are obsessed with the game, Fall Guys, but I do think the music is under-appreciated. It sparks joy within me and is just innocent fun.

This is a gem of 2012 instrumental cloud rap — a genre I’ve never fully got into, but I fell in love with this beat tape in April. It’s got an incredibly cozy and nostalgic vibe that makes me think of the good times in my hometown growing up with the pals.

Around June, I was feeling pretty emo and not really listening to any heavy dance or festival music at all. Got into this drumless techno producer Barker and have been listening to his records before bed ever since. This track focuses on a simple chord progression with syncopated rhythmic synth layers and meticulous processing evolving over time.

An absolutely banging euphoric rave tune I’ve been bopping to since July. It’s got a modern, clean punch you’d find in today’s EDM without taking away from the old school and eurodance vibes. The vocal is just perfect, too. Anyone who can sing a good eurodance vocal DM me, I wanna work together!