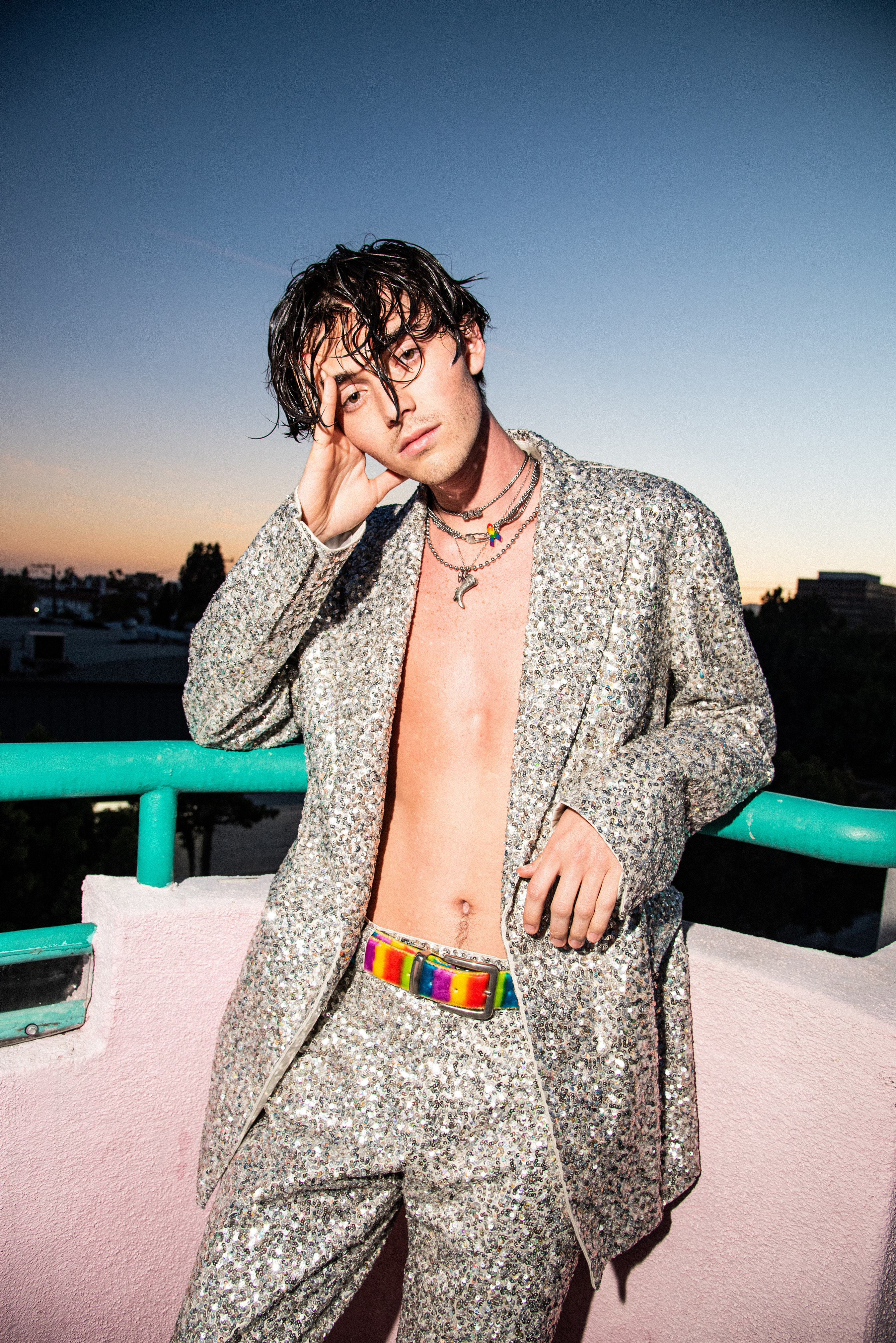 “You’re gearing up for Pride performances, right?” I ask Greyson Chance at the outset of our interview.

“Yeah, the past few days I’ve been locked into the rehearsal studio getting ready. We fly to Milwaukee tonight. Milwaukee Pride is on Thursday, and then I do Detroit Pride on Saturday, and then LA Pride on Sunday,” Chance tells me, excited at the frequency of the performances. I liken his Pride performance schedule to that of a queen from RuPaul’s Drag Race. “I could probably be more familiar,” he laughs when I ask him if he’s seen the show. “I call it my big gay weekend.”

This is new territory for Chance, the young singer-songwriter made famous on YouTube back in his childhood, but not necessarily a frontier. The stream of Pride parades isn’t anything new, as he tells me he’s been going to Pride in his home state of Oklahoma since he was a kid. The act of performing, fully embracing his outness and singing about genuine love and loss in front of the massive throngs of Pride-goers is what feels so untried. “Honestly it feels a dream come true to be able to play these sets,” he says.

greyson chance on Instagram: “The decision to write this came after I received a message from a brave individual. Such message inspired me to shed light on an aspect of…”

At age 19, Chance came out as gay to his fans on Instagram; a bold rainbow flag covers a square on his grid back in July, 2017, marking the day he went public about his sexual orientation. “I had actually come out to my friends and family probably when I was 16. I had already been living out,” Chance tells me. It’s commonplace nowadays, for a generation that questions the very crux of some hegemonic “coming out” experience, to apply a gradient of publicness to these traditionally private facts, especially since navigating identity is such a multi-angled journey. “I mean there were still people in my life who low-key didn’t know. I was kind of taking it slow,” he says, making sure to note the source of the gradualness of it all. “I just wanted to find the self-confidence for it before I did it.”

What came after was a beautiful storm of support from almost every angle; press outlets came out in droves to write about the update in the singer’s life, and recently he appeared on Ellen, the very show that helped kickstart his “Paparazzi” virality, to talk about his experience. From the outside, it appeared that Chance had the perfect coming out — puzzle piece after puzzle piece fit together squarely, a formerly unprecedented experience for LGBTQ+ celebrities before him. While they might’ve found themselves outed in tabloids and gossip sites in the 2000s, young gay celebrities today can exercise full autonomy, taking to a platform like Instagram to announce and express. 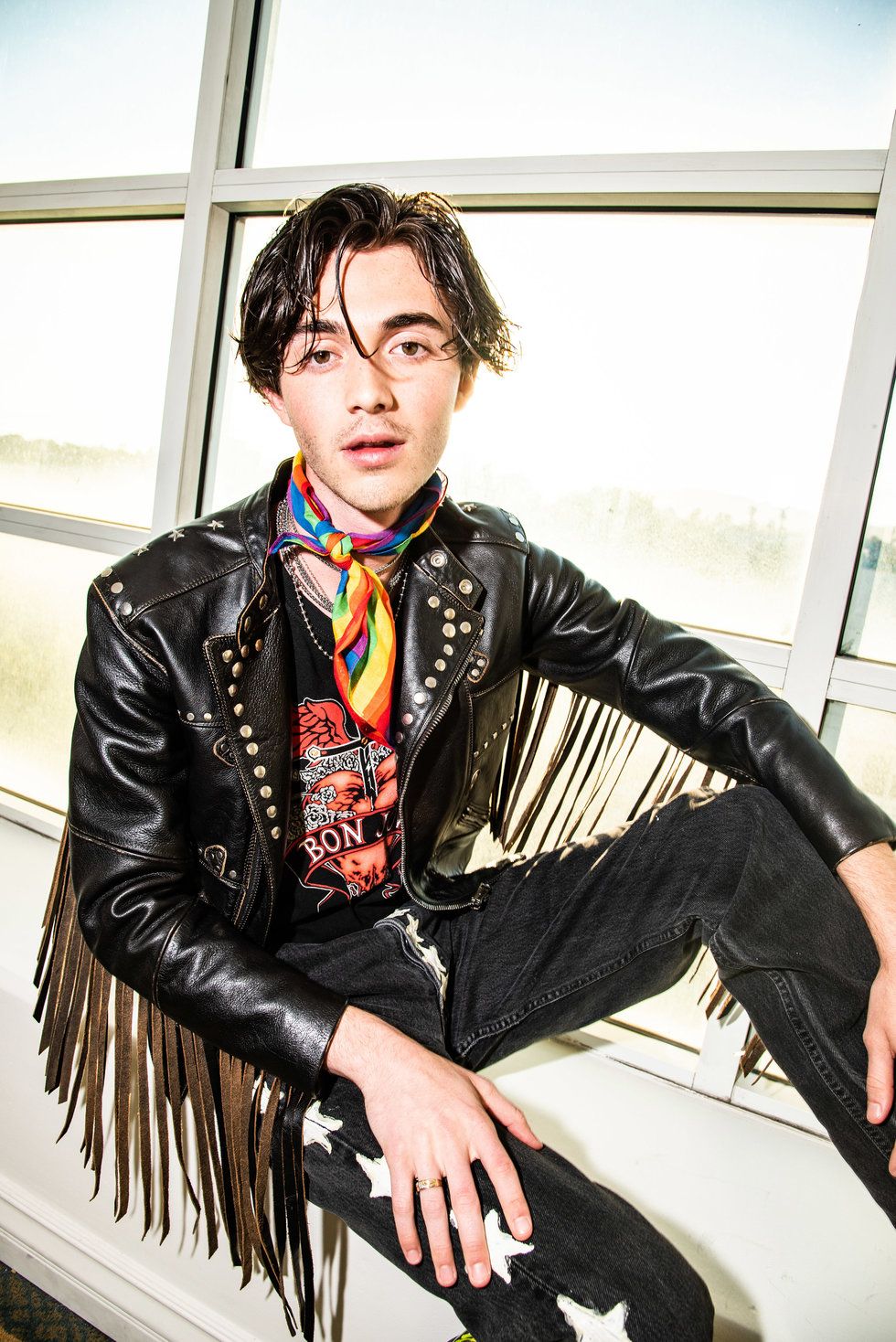 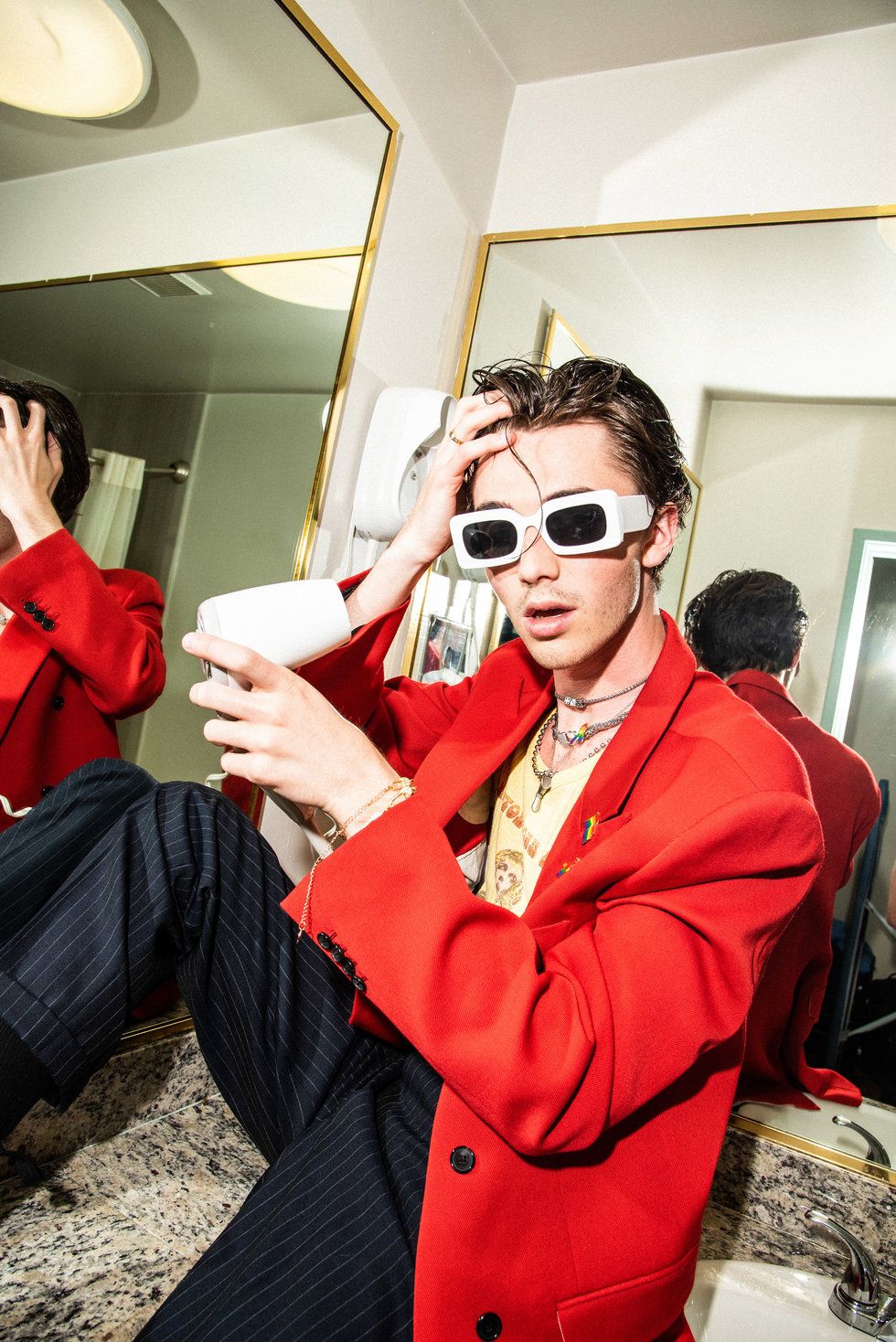 On the inside, Chance was content with his coming out experience, as well. “I feel like when you finally realize, ‘Ok, I’m gay,’ everything in the past then makes a lot of sense. You know when I was like 12 or 13, I was like, ‘Man, I love really Born this Way. I relate to this music!'” he tells me, describing age 16 as finally being his “lightbulb” moment. Suddenly, his early love of Lady Gaga, his public support of her values both as a fan and as a rising artist, pulls into focus. While not the cornerstone of his career, it’s surely important to note this dawn of self actualization, right?

For Chance, nothing seems to be that clear-cut, and understandably so. While his identity and confidence were built over time, he describes a sense of chaos that infiltrated his adolescent years. “For me, my adolescence was so crazy. My focus was always trying to put on the best show that I could. I think in a way I was a bit, either fortunately or unfortunately, distracted by things going on internally just because I was so busy,” he says. 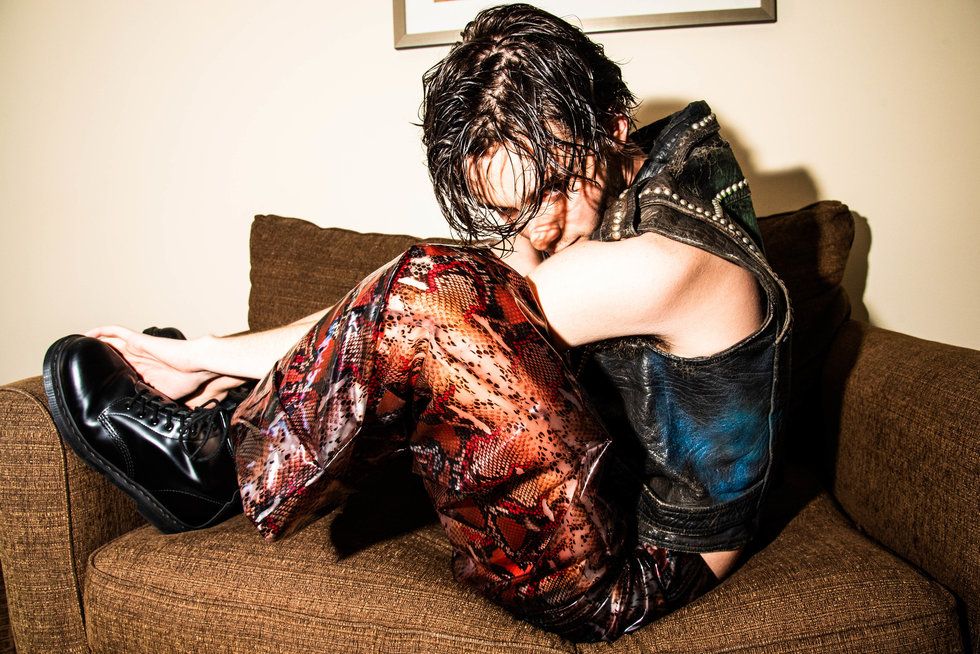 What is extremely clear-cut about Chance’s story, however, is the early embrace of the spotlight, despite its contribution to some of his more unstable moments in his teen years. “I started off being signed to a major when I was 12 years old, and then had to go through being dropped by that label when I was 15. My late teenage years were spent with me trying to figure myself out, figure out whether I was going to be able to have a future in music,” he describes, having his love of song and stage put into limbo. “For the longest time people told me, ‘Hey, you have this one thing. You have this really popular video and that might be your story. That might be it. There might be nothing after that.'”

Something seems so bitterly ironic about there being a guideline of rigid singularity put upon an artist who belongs to a community of people that resist singularity and definition. Chance’s early years were so muddled by imposition that he tells me, “I think for a long time I felt that my craft had sort of been hijacked.” 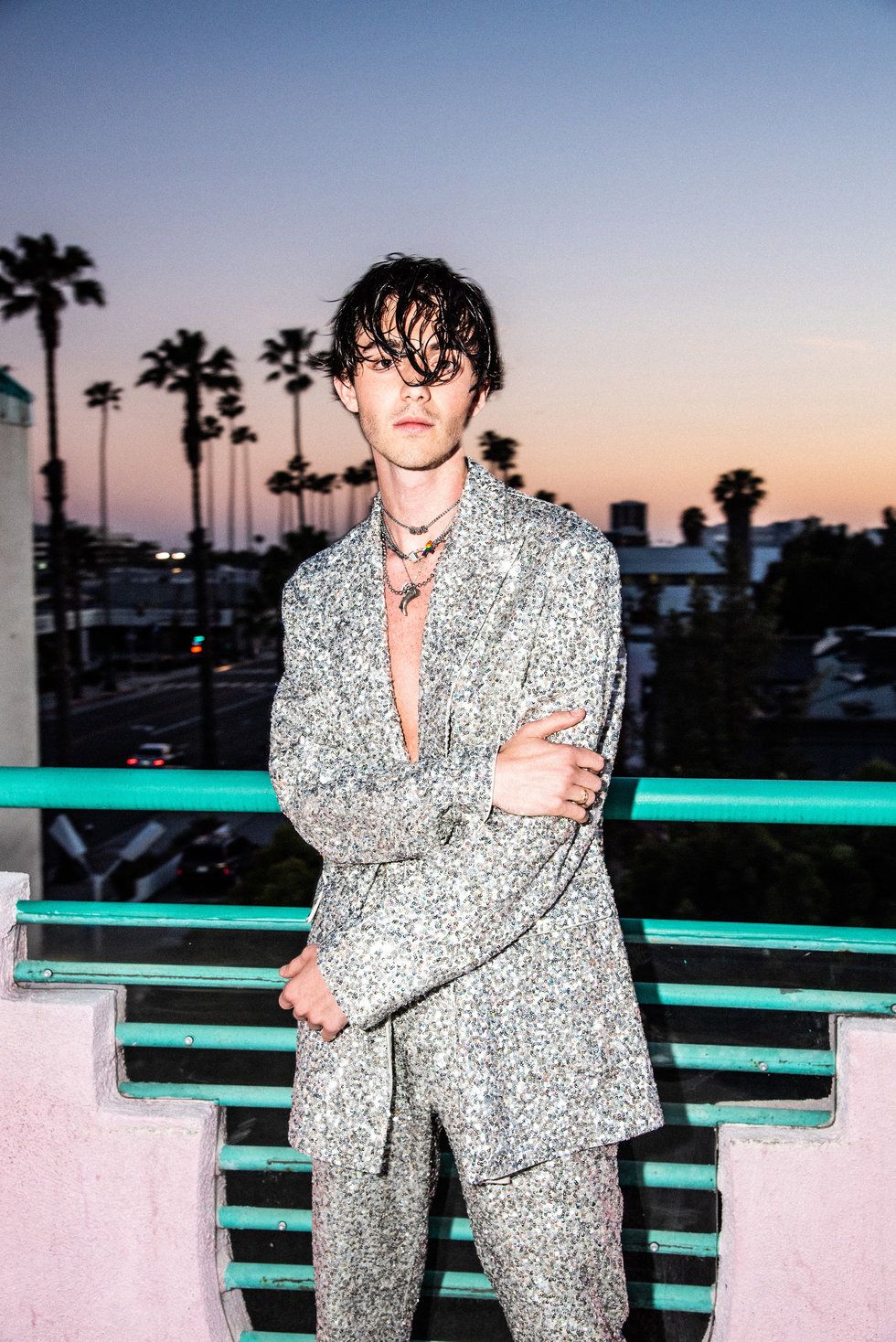 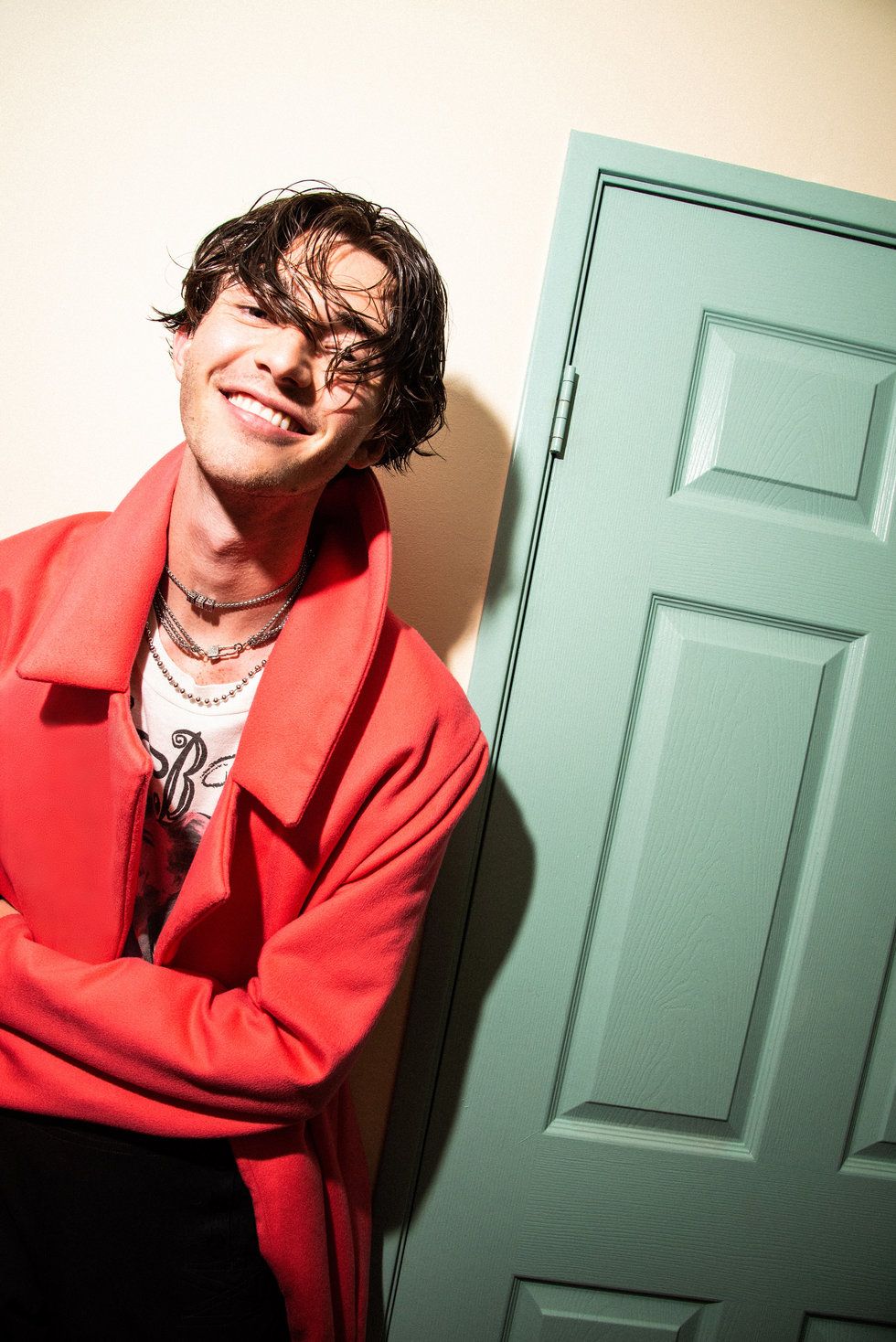 Then came Portraits, what he calls his “debut album,” despite it being the end to an eight-years-long gap since his first album, Hold On ’til the Night. Released in March, 2019, Portraits was something of a true artistic venture for Chance. “In my late teen years, I was very concerned about sort of the cause and effect of it all. Am I going to write a record that is going to be marketable? Am I going to write a record that might have a chance at radio? All of these sorts of things,” he describes his process pre-Portraits. “In that way, I called Portraits my debut album, even though it’s technically my second record, because to me it feels like the first time I’ve ever been truly honest and truly authentic with my fans, audience, and music.”

I tell Chance that Portraits comes across as poetic, and while not a full-stop pivot from the brand of singer-songwriter pop that fully represented Hold On ’til the Night, it nears a 90-degree-turn territory. A song called “White Roses” stands out to me amongst the pack of alt-pop inspired ballads with folksy percussive elements that cushion the record’s more heartbreaking moments. I point to a line in “White Roses” that feels especially poignant in reference to his experiences as an artist and person. He chants in the chorus, “Darling be careful with me because there’s a part of me you don’t know.” 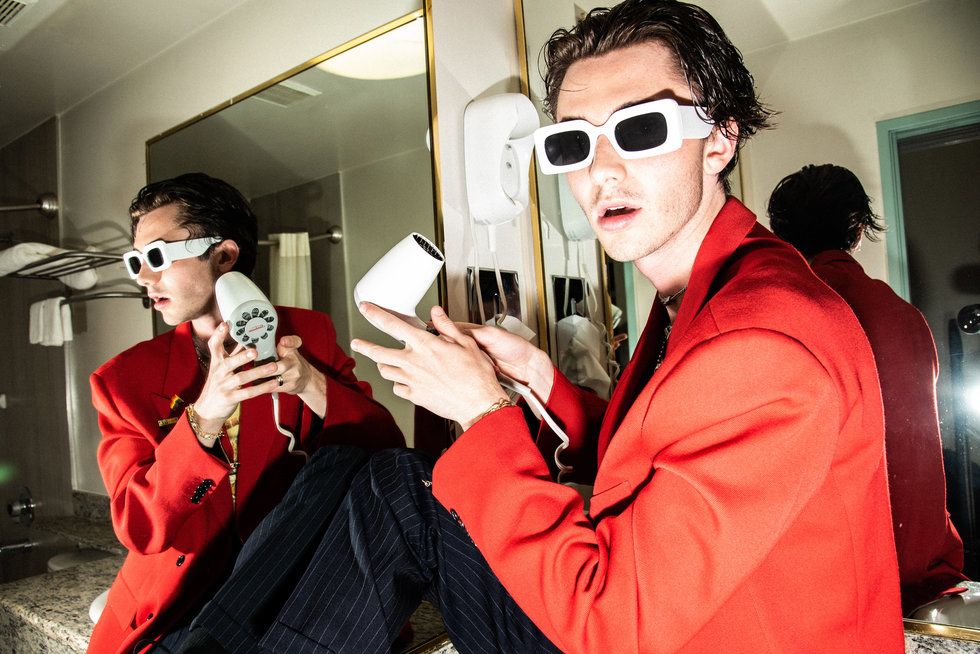 Pre-interview, I questioned whether or not to bring up the fact that the echoing tonic of the album, combined with some of the more melancholic lyrics, remind me of Bon Iver’s sorrow-inundated slow dances. I was taken aback when Chance brought the comparison up himself, stating, “It was really inspired by the song ‘Blood Bank’ which was a Bon Iver record that, off one of his first EPs, I had been listening to and studying a lot where he says ‘the secret that you’ll never know.'”

He describes the lyrics as “pertinent” to him in more ways than one. Firstly, he addresses the meaning as it pertains to his life in the public eye: “I think now, the biggest challenge I face sometimes is: I cherish my private life so much and I cherish my relationships with people. I don’t think you’ll ever find me being that public about who I’m dating or who I’m seeing on my social media, ever, because that feels like a sacred space to me.” Then, he addresses the flip side of the coin — one that happens to be a bit more private, stating, “To talk about that line in particular, I was going through a lot of hard shit when I was younger and really had to deal with loss, in a way, of people being involved in my life. All of a sudden when my record wasn’t selling well, just completely leaving me in the dust.” 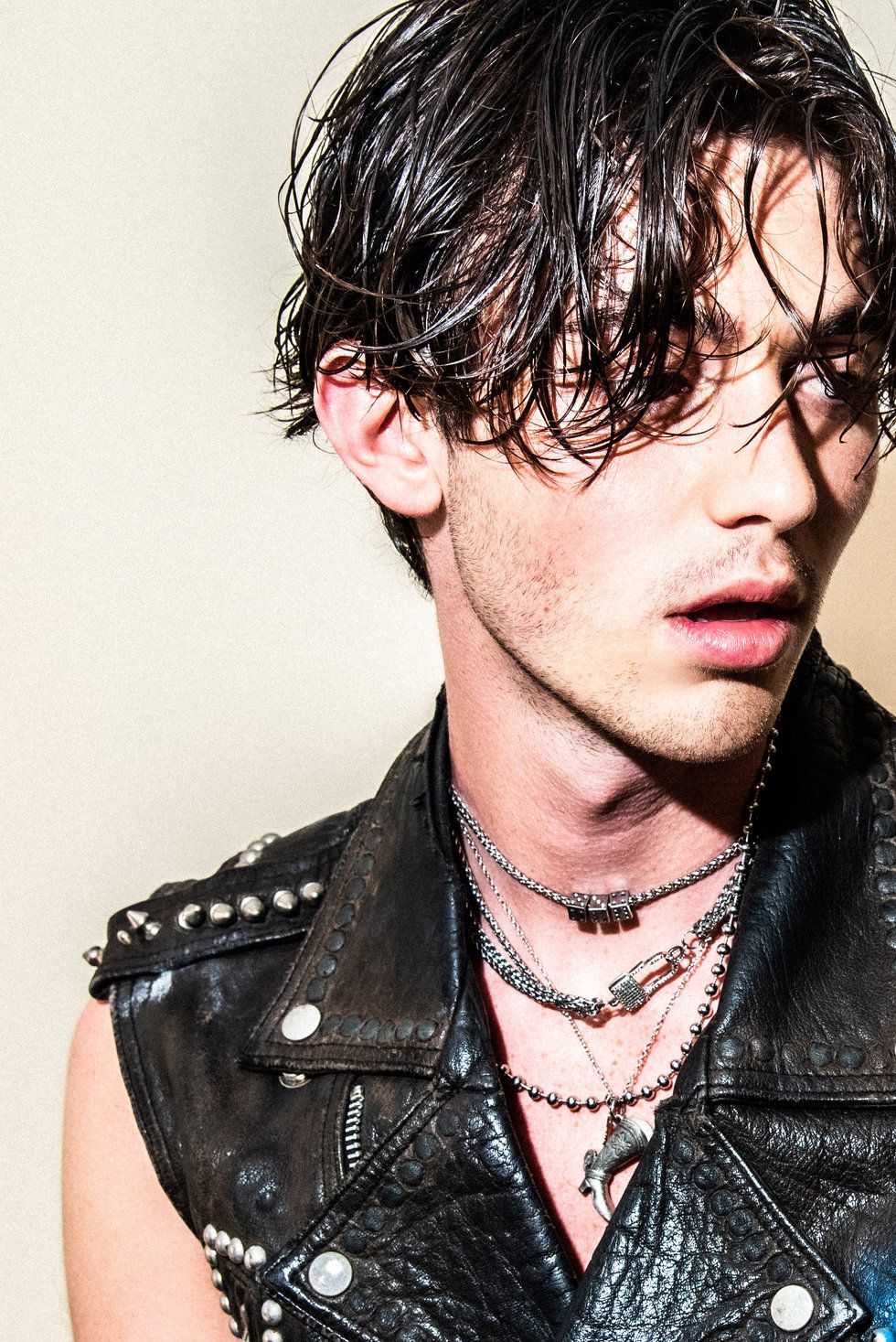 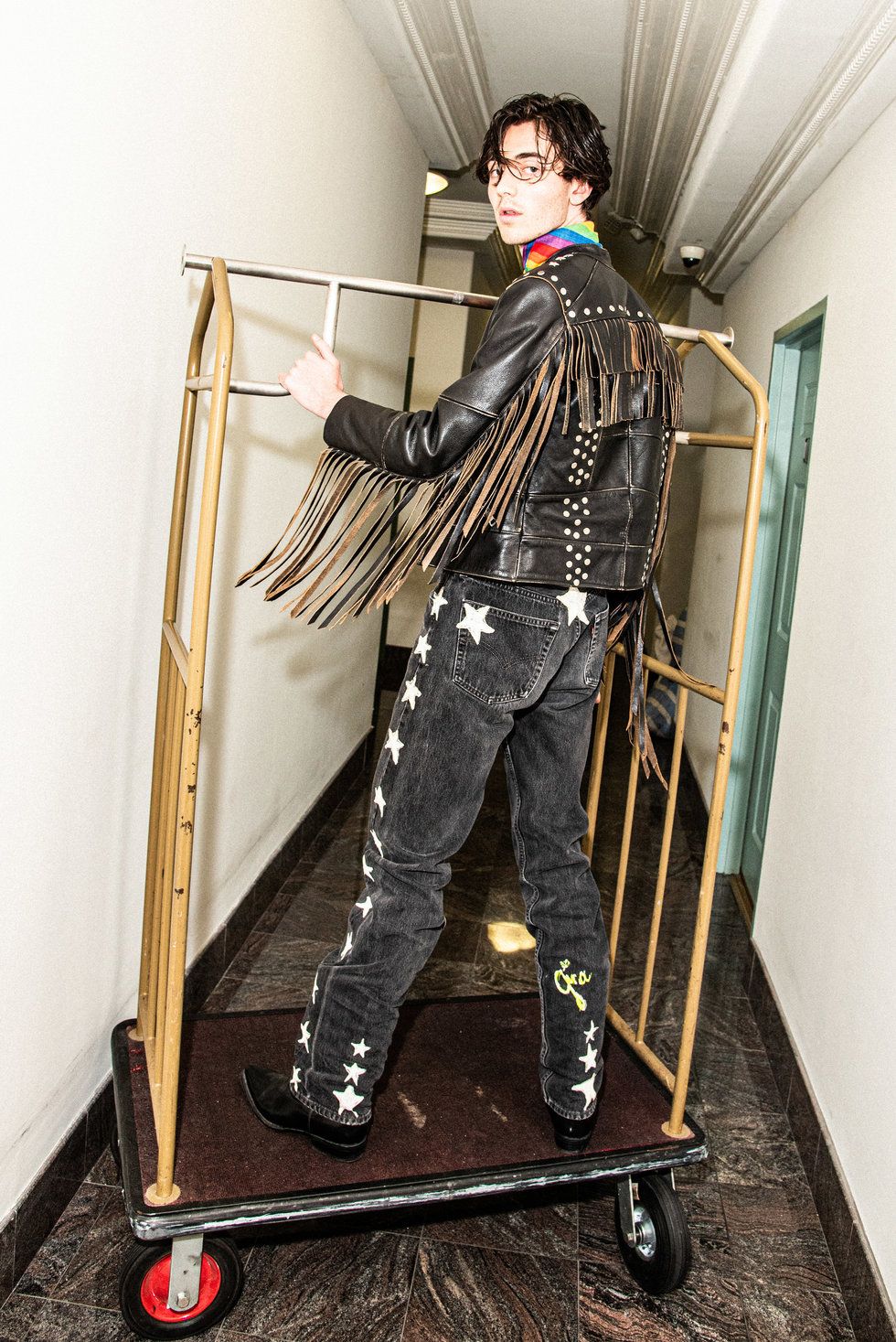 The conversation seems to have pierced a wound that’s especially fresh, a wound caused by the full-stop heartbreak examined at length on Portraits. “I think that was sort of me saying to my ex-boyfriend, ‘There’s a type of loss that I’ve experienced in my youth that you don’t understand and in a way resembles what you’re doing to me now by leaving me again,'” Chance tells me of the song “White Roses.” He continues, “I could talk about that song way too long, and then I’ll start crying, and then I’ll want to have a drink and it’s only 10:30, so we should cut it off there.”

I push a bit more about the overall melancholy of Portraits towards the end of our interview, especially in the context of his prior teenage career which produced almost only glazed bops and never anything bordering on risqué. “I think last year this time I was just getting out a relationship where I thought I was going to get married and that’s what ‘White Roses’ is about,” he tells me. “When I was writing Portraits I was in the eye of the hurricane. I was in the peak of the storm and was really going through a lot of things emotionally. Now that the storm has passed and the sun is shining, I’m looking at all the destruction and am able to really reflect on it and be introspective.” 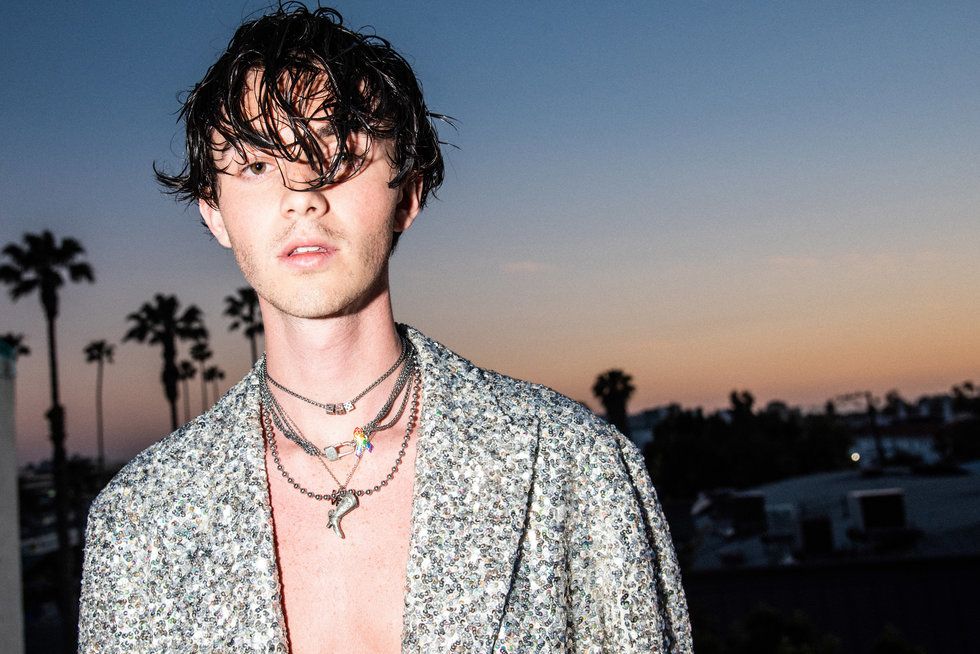 It seems as if Greyson Chance has taken the 6G child-star rollercoaster for a ride, gotten off, and been able to leave it without needing an overdose of dramamine. He’s gone through hell and can write about it too now, but is confident in the future. Chance is living life as it’s meant to be lived, somehow circumventing fame altogether and striking a private/public balance — something that seems nearly impossible in the present day. He’s able to exist as an artist, touring and traveling, but maintain privacy, while also “coming out.” Chance exists in a perfect storm of contradictions.

When I comment on all of this, he replies curtly, “You know, some days I do want to ‘break the internet,’ but then on other days, I want to turn my phone off and relax.”